With the upcoming Apple announcement only a day away, the business world is buzzing in anticipation. What will Tim Cook unveil next—and how will it impact our lives? Whether tomorrow’s announcements harken a new iPhone or a wearable device, we can be certain of one thing: the presentations will be of the highest caliber.

Over the past three decades, Apple’s executives have delivered some of the best presentations in the business. From Steve Jobs’ unveiling of the first iMac in 1998 to Tim Cook’s keynote at last year’s Worldwide Developers’ Conference, Apple has served as an exemplary model for effective content and delivery for years.

As we get ready for the next big product launch from Cupertino, let’s look back at some of the presentation techniques that have made past Apple announcements so great. If you want to present like Steve Jobs, make note of this list in the prezi below and follow these tips next time you get up on stage.

Apple sticks to sleek, simple design when it comes to its devices—and its presentations are no different. From the language to the visuals, everything in an Apple presentation is designed to convey one message at a time as clearly as possible. This dedication to clarity and simplicity ensures that Apple’s audiences come away from these presentations with the exact message that Apple wants to spread. Communications expert Carmine Gallo praises Apple executives for going so far as to make sure that their headlines are less than 140 characters long, so media outlets and audience members can tweet them out exactly as they said on stage. Take a look at Twitter after tomorrow’s announcement—you might just notice the same headlines, straight from Tim Cook’s mouth, making the rounds.

2. BRING YOUR DATA TO LIFE WITH VISUALS. (TWEET THIS!) 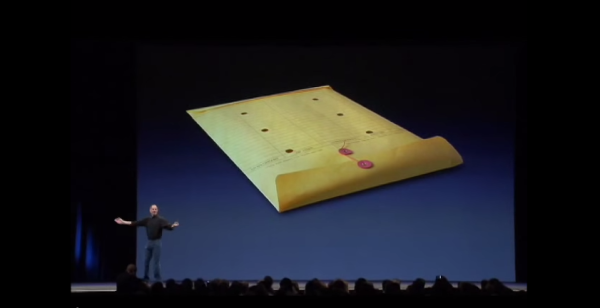 Steve Jobs understood the importance of powerful imagery. When he announced the launch of the MacBook Air on stage in 2008, Jobs wanted to highlight just how thin Apple’s newest laptop computer was. Instead, however, of simply telling his audience the impressive dimensions of the computer, he showed them, using an image of a manilla envelope.

“It’s so thin,” he said, “it even fits inside one of these envelopes we’ve seen floating around the office.” With this powerful image, Jobs was able to get his message across in a much more compelling way than he would have with numbers and text alone.

Visuals are scientifically proven to help your audience remember your message. Several studies have shown that when combined with images, text-based information is 42% more memorable.

At the Macworld Conference in 2007, Steve Jobs’ clicker famously failed him. Instead of throwing the wretched piece of plastic on the ground or storming off the stage, Steve kept his cool. He made a joke to put the audience at ease, and then launched into a story about his adventures with Apple co-founder Steve Wozniak in high school.

In a matter of minutes—which can feel like hours when you’re up on stage with no backup—the clicker was working again, and Steve was able to continue with his talk. Steve seemed like a natural on stage, but in fact he was meticulous about his preparation—which included preparing anecdotes to tell when clickers stopped working.

Steve Jobs was famous for his audacious statements and bold choices, especially when it came to presenting. Jobs knew how to work an audience—and how to delight them with the unexpected. A great example of this kind of “wow” moment is from Jobs’ introduction of the iPhone in 2007.

“Today, we’re introducing three revolutionary products,” Steve began. “The first one is a widescreen iPod with touch controls. The second is a revolutionary mobile phone. And the third is a breakthrough Internet communications device.” He repeats these lines as the audience begins to cheer. “Are you getting it? These are not three separate devices. This is one device.” And the crowd went wild.

By baking a surprising “wow” moment into every presentation, you’ll be able to keep your audience engaged and enthused—because they’ll never know what to expect next.

5 Prezi Next templates for the workplace